The Berlin Conference of 1884-1885 marked the climax of the European competition for territory in Africa, a process commonly known as the Scramble for Africa.  During the 1870s and early 1880s European nations such as Great Britain, France and Germany began looking to Africa for natural resources for their growing industrial sectors as well as a potential market for the goods these factories produced.  As a result these governments sough to safeguard their commercial interests in African and began sending scouts to the continent to secure treaties from indigenous peoples or their supposed representatives.  Similarly, Belgium’s King Leopold II, who aspired to increase his personal wealth by acquiring African territory, hired agent to lay claim to vast tracts of land in central Africa.  To protect Germany’s commercial interests, German Chancellor Otto von Bismarck, who was otherwise uninterested in Africa, felt compelled to stake claims to African land. 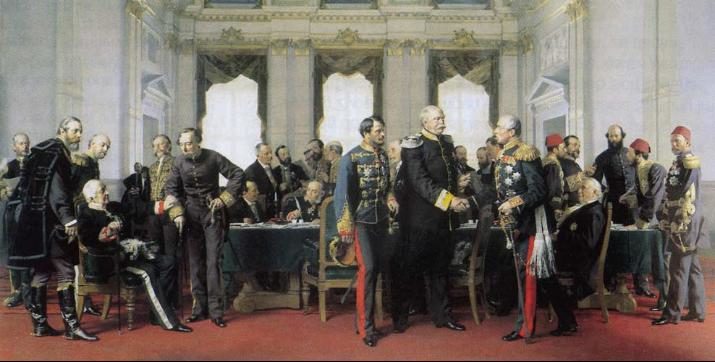 Inevitably, the scramble for territory led to conflict among European powers particularly between the British and French in West Africa; Egypt, the Portuguese and the British in East Africa; and the French and King Leopold II in central Africa.  Rivalry between Great Britain and France led Bismarck to intervene, and in late 1884 he called a meeting of European powers in Berlin.  In the subsequent meetings, Great Britain, France, Germany, Portugal, and King Leopold II negotiated their claims to African territory, which were then formalized and mapped.

During the conference the leaders also agreed to allow free trade among the colonies and established a framework for negotiating future European claims in Africa.  Neither the Berlin Conference itself nor the framework for future negotiations provided any say for the peoples of Africa over the partitioning of their homelands.  The Berlin Conference did not initiate European colonization of Africa, but it did legitimate and formalize the process.  In addition, it sparked new interest in Africa.  Following the close of the conference, European powers expanded their claims in Africa such that by 1990, European states had claimed nearly 90 percent of African territory.